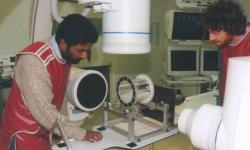 
UCT researchers have turned to medical technology to study the inner workings of one of the mining industry's most common mineral processing devices.

More traditionally used for scanning heart valve motion in medical patients, a bi-planar angioscope is being used to create a three-dimensional image of a tumbling mill as a way to validate results from an increasingly popular branch of applied research known as Discrete Element Modelling (DEM).

According to UCT Mineral Processing Research Unit researcher Dr Malcolm Powell, DEM is essentially a way of describing what is going on inside the mill, based on Newton's laws of force and motion. It is used in designing mill components, such as liners, and to predict power draw in mineral processing milling equipment.

As the use of energy is potentially a large cost to a milling operation, the UCT team believes DEM holds the key to reducing these costs through a better understanding of what is going on inside the mill.

To get an accurate validation of a DEM description, PhD student Indresan Govender uses x-rays taken by the angioscope to create a three dimensional image of the scaled-down perspex tumbling mill that he has built.

Until now, no-one has used this very expensive and highly sophisticated piece of medical equipment, found almost exclusively in hospitals, to work on a mineral processing problem.

â€œAn angioscope is a multi-million rand piece of equipment, so we take our little mill rig, which is designed to be portable, and do our test work in an operating theatre at Tygerberg,â€ Powell commented.

The approach is to x-ray the mill on two perpendicular planes simultaneously using the angioscope to film at 50 to 74 frames a second, with a very fast 3/1000 of a second exposure time, digitally capturing the images.

Govender analyses the images, reconstructing a full 3-D image. He then automatically scans the image for the parts of interest, reconstructing the image into three-dimensional space. â€œWhat we've done is put a single set of data of 15 000 images in the reconstruction, so that when we use a piece of data to compare, we've got a statistical analysis over a couple of minutes of running time,â€ Powell explained.

â€œOnce you've reconstituted the images and cut the ones that didn't come up clearly, you're left with over 6000 frames, providing as many image points for comparison. This is what we are using to compare the DEM description with.â€

Powell points out the DEM/angioscope approach has the potential to test other mineral processing equipment, such as cyclones, as well have implications for open heart surgery in the future, if their research proves successful.

Using the angioscope for its â€œrealâ€ purpose, a surgeon moves the unit's two cameras to angles where the best view of the heart is obtained. Only one image is used to start the operation.

â€œIt's quite a difficult image to view as you see all the way through the heart, which means if your instrument is already in there you don't know its depth,â€ Powell noted. â€œThat's when you look at the second image from a different angle to gauge the depth and position of the instrument.â€

All operations are done from the venous, or low pressure, side. A pipe is inserted in the groin area up to the heart. The surgeon then cuts through an interior wall of the heart to get to the high pressure side.

The trick is using a one centimetre diameter disk cutter to cut through the heart wall, pushing the catheters through, then the balloon, and finally the surgeon's knife.

â€œHow we as mineral processors could help the medical profession is to create a 3-D image of the catheter going into the heart,â€ Powell explained. â€œSurgeons have to work within centimetres, but we can locate our mineral particles within 0.2mm.â€

This was possible through the image analysis software that Govender had set up for the DEM project work. â€œIt doesn't seem that such a 3-D image of the heart has been constructed for use in the medical profession, and we don't see why this shouldn't happen,â€ Powell concluded.