How to make an Overberg quilt 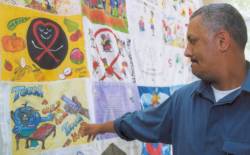 Pointing in the right direction: The Schools Development Unit's Achmat Adams with an AIDS quilt compiled by 22 schools in the Overberg region.

TAKING a detour from its mainly academic focus, the UCT-based Schools Development Unit (SDU) recently ran an AIDS project with schools in the scenic Overberg region that culminated in the unveiling of a commemorative quilt during AIDS Week in September.

The programme is an offshoot of the SDU's Management for Learning (MFL) Project, which it has been running with 12 Overberg primary schools since 2000. As part of the MFL, the Unit has been offering workshops on maths and science education, school management, language education and lifeskills with teachers, principals and, occasionally, learners from these schools.

Last year, the SDU took up the Health Promoting Schools (HPS) concept, as championed by the World Health Organisation (WHO) and adopted by countries around the world, including South Africa. HPS attempts to reconfigure policies and structures in an attempt to protect and promote the health and well-being – physical and otherwise - of students and staff at schools.

Using the HPS concept to focus on the impact of AIDS on schools in the Overberg, the SDU involved teachers, principals and learners to work through the five principles of HPS, explains Achmat Adams, a lifeskills education specialist with the SDU who has been managing the HPS project.

These principles involve scrutinising health policies at the schools, looking at the kind of supportive environment that is required, gauging the skills that are needed by stakeholders to tackle the problem, seeing who in the broader community can assist the schools, and securing the buy-in from the rest of the community.

Adams hosted monthly workshops with facilitating teachers from each of the 22 schools – 10 more than those involved in the MFL – working through these five principles. And, taking its cue from the South African AIDS quilt, the SDU had every school prepare one (or more) panels for a 25-panel Overberg quilt that was unveiled at a special AIDS awareness function on September 5.

The event included presentations from some of the schools, as well as dance and song renditions, and the handing over of certificates to the participating schools. The national departments of Health and Education, the Elgin Community College and the Groenland AIDS Action Group (GAAG) were among those involved.

In its panel(s), each school illustrated, through words and graphics, how it had been affected by AIDS, as well as other social problems, explained Adams. â€œIt's also a way for people to remember loved ones they had lost to the disease,â€ he said.

The HPS programme and the AIDS quilt have generated a number of developments, including the planting of vegetable gardens to feed learners and generate income for schools, and the establishment of a drama group, reports Adams. A number of schools have also decided to put together their own quilts.

â€œThere have been some wonderful things happening because of HPS and the quilt,â€ he commented. â€œAnd a lot of schools have become very health conscious.â€