Aspirin may hold the key to new cervical cancer drugs 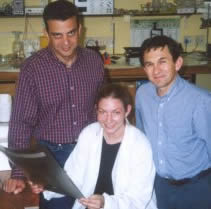 Tracking a killer: (Left to right) Researchers Dr Henry Jabbour from the British MRC's Human Reproductive Sciences Unit at the University of Edinburgh; PhD student Melissa Muller; and Assoc. Prof Arieh Katz are investigating the role of COX enzymes in the growth of cervical cancer cells in women.


THE humble aspirin could hold new promise for the treatment of uterine cervical cancer, a deadly cancer affecting 60 in every 100 000 South African women. It has been reported that South Africa has the highest incidence of cervical cancer in the world.

â€œIt is a disease that needs to be caught early, but there are no national screening programmes,â€ said researcher Associate Professor Arieh Katz, a Senior Wellcome Fellow in the Division of Medical Biochemistry. A Pap smear (named after Dr George Papanicolaou), remains the best means of detecting the presence of pre-malignant lesions on the cervix. By the time a woman shows symptoms: bleeding, secretions or abdominal pain, it is usually too late to cure.

The disease is linked to socio-economic conditions and is particularly common in less developed countries. Extensive laboratory and epidemiological evidence has established that the human papillomavirus (HPV) is a major cause for the development of cervical cancer. â€œIn addition to HPV, women presenting with cervical carcinoma show a high incidence of venereally transmitted disease, genital warts, genital herpes and trichomonas infection,â€ Katz noted.

Since 1999 Katz has been collaborating with Dr Henry Jabbour, who is a Senior Scientist at the British MRC's Human Reproductive Sciences Unit at the University of Edinburgh. They are examining the role of two important enzymes, COX-1 and COX-2 (cyclooxygenase) and their prostaglandin products in the development and progression of cervical cancer, with a parallel effort to discover suitable drug targets.

Essentially, the COX enzymes enhance the progress of cancer tumours by supporting cell division, the growth of blood vessels in the tumour and by reducing the rate of cell death.

The research team, that included PhD student Kurt Sales (who graduated in June this year) found that cervical cancer tissue has elevated levels of both COX-1 and 2 enzymes and their synthesized prostaglandins products. These findings implicate COX enzymes in the growth of cervical tumours and suggests that inhibitors to COX enzymes may provide effective treatment for cervical cancer. The researchers' current task is to decipher the molecular mechanism by which elevated COX enzyme influence the development and progression of cervical cancers.

â€œFurther research will examine the effects of prostaglandin on cervical carcinomas and the specific biochemical signalling pathways and target genes that allow the cells to become malignant,â€ explained Jabbour.

â€œIn turn, these findings will highlight possible intervention therapies that may suppress or inhibit tumour growth or suppression.â€

Hope appears in the form of aspirin, already widely used in the treatment of heart disease. According to Katz, a recent study of nurses in Britain had revealed that nurses who routinely used aspirin had a lower incidence of colon cancer. The tissue of the colon and the cervix is the same. The same active ingredient in aspirin that acts as an anti-coagulant, or thins the blood, also inhibits the COX enzymes that enhance the growth of colon and cervical cancers.

â€œBut we need to understand more about COX enzymes to be sure that aspirin will be beneficial, or at least slow the progress of cervical cancer,â€ Jabbour said.

The one-year fellowship will allow Muller to work in Jabbour's laboratory for two six-month periods beginning in January next year (unfortunately these six-month stints are during winter). â€œIt is important for this collaboration that she goes back and forward between the two institutions to create an exchange of ideas,â€ Jabbour added.

Muller's work examines the effect of prostaglandin on the levels of COX enzymes, which, in turn, promote tumorous cell growth. This is significant research as semen contains large amounts of prostaglandin and can thus promote cervical tumorigenesis in sexually active women.

(The collaboration involves Groote Schuur Hospital — through Dr Rob Soeters, head of gynaecological oncology in the Department of Obstetrics and Gynaecology and the Division of Anatomical Pathology at UCT).