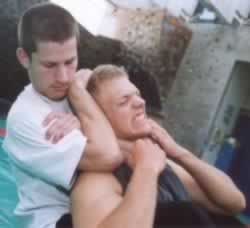 Tough stuff: students Joseph Whitaker (left) and Nick Gregoriades demonstrate the ancient sport of pankration, which is fast growing in popularity at UCT. Pankration was first introduced as an Olympic event at the 30th Olympiad in 648BC. Initially described as a form of "all-in" wrestling, the modern version includes elements of boxing, wrestling and many forms of martial arts. Unlike early Olympic sports, women also participate in this boistrous sport.

THE ancient sport of pankration may as yet have no established club on Campus, but that has not deterred a number of UCT students from grappling, gouging, hitting and choking their way to medals in the sport's national championships in September.

First introduced as an Olympic event at the 30th Olympiad in 648 BC, pankration – the Greek word for â€œall powersâ€ or â€œall powerfulâ€ – was initially described as a form of â€œall-inâ€ wrestling. The modern day version of the sport includes elements of boxing, wrestling, and just about all forms of martial arts, and even has a â€œno holds barredâ€ version.

While most kinds of striking is allowed, competitors are not allowed to hit their opponents in the face or – thankfully – the groin in the more common format of the sport, explains Whitaker, whose interest in martial arts led him to join the Cape Town Pankration Club with Meyer early this year. â€œBeyond that, it allows pretty much anything,â€ he says.

Pankration is also just about the closest thing to real fighting, Whitaker adds, pointing out that this is part of its appeal. â€œIt's sweet,â€ notes Meyer.

The fastest growing martial art in the world, pankration will return to the Olympics in 2004 as an exhibition event.

Whitaker and Meyer are keen to start a UCT pankration club. Those interested can email Whitaker or phone him at 021-671-7004.