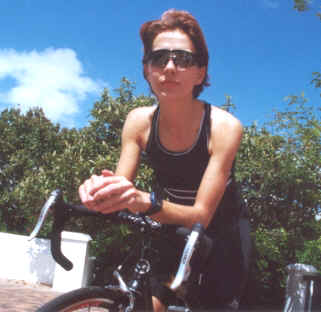 
JOEY Haasbroek celebrated her new position as UCT Web Manager in style by winning her first ever race in the Western Cape Pedal Power Association (PPA), barely a month after taking office at the Department of Communication and Marketing early in January.

Haasbroek pedalled her way to first place in the Die Wingerd Breakfast Ride in Somerset West in mid-February, covering the 63-km distance in a spry 1:38:25. The race forms part of the PPA's 12-event 2001/2002 summer season.

"I was surprised and pleased," said Haasbroek, whose best result, up to the Somerset contest, was a runner-up spot in a December race. "I see it as good preparation for the Argus in March, a race that I consider as my main goal for the year."