When you're not thirsty, don't drink 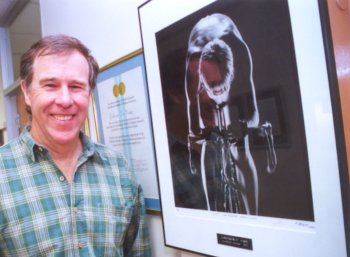 
SPORTS science pundit Professor Tim Noakes caused an award-winning stir at this year's Canadian Association of Sports Medicine (CASM) Conference where he delivered two lectures on the most recent – and controversial – findings on sports science, presentations which earned him the Best Speaker honour at the gathering.

Noakes' talks on, firstly, the theory that the brain regulates exercise performance and, secondly, on the occurrence of over-drinking during exercise, caused some upheaval, challenging some "age-old" orthodoxies of sports science. So impressed were delegates, however, that they selected him for the Best Speaker award at the event, hosted in March at the Mont Tremblant Ski Resort just outside Montreal.

The first non-Canadian to present the colloquium's Richard Lance Keynote Lecture, named after the late orthopaedic sports medicine specialist who became one of the first presidents of CASM, Noakes dealt with the idea of the body as a homeostat with the brain as the control centre. According to this model, the brain monitors information that it receives from the body's organs, integrates it and then calculates a suitable response that ensures the body's survival, explains Noakes.

"The response is the rate at which you do work, i.e. the speed at which you exercise. The body chooses, in a race for example, the top speed that you can sustain without harming it.

In his second talk, Noakes spoke about fluid balance during exercise and addressed specifically the problem on how much to drink during exercise. It's on this topic that he has regularly locked horns with the American College of Sports Medicine (ACSM), who hold that athletes must drink as much as possible during exercise.

This advice, says Noakes, is based on good science done in unphysiological conditions in a laboratory that does not relate to exercise out-of-doors. "In the field, we've never been able to show that people who are more dehydrated are at greater risk of damaging their health during competition. In fact, in many of the races we study, the most dehydrated athletes are usually the race winners."

The San Diego and Houston marathons in the United States have experienced "an absolute epidemic of this condition of water intoxication" over the past few years, while a woman died in the recent Boston Marathon because of this condition, says Noakes. Thanks to recommendations by local experts – "drink only when thirsty" – such incidents are never seen in South African standard marathons, and if they do still occur, only rarely during ultra-distance events (lasting eight to nine hours), he adds.

"When you're not thirsty, don't drink," is Noakes' succinct counsel.

As reward for his oratory skills, Noakes was allowed to select, under the watchful eye of his better half, one of a valuable series of photographs of members of the Canadian 2000 Sydney Olympic team, artistically snapped in the company of their sporting equipment – but sans their clothes – by noted Canadian photographer, Jean-FranÃ§ois BÃ©rubÃ©. Noakes and his wife opted for the picture of road cyclist, Lynne Bessette.

Noakes will pick up another award when he returns to Cannes shortly for this year's International Symposium on Water, where he was honoured last year with the Cannes International Prize for Water and Medicine Research for his work on sports-induced hyponatremia, the direct result of athletes being told to drink as much as possible.