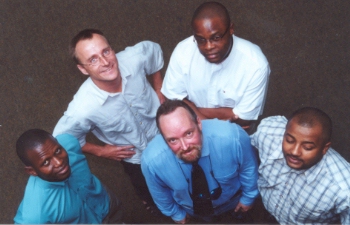 Looking up: From left (back), James Hodge (TRPG-UCT), Kennedy Mbekeani (SATRN), and (front), Tiro Kayaswe (SATRN), Prof Don Ross (UCT) and Samson Muradzikwa (UCT) will soon be putting a troupe of SADC delegates through their paces as they prepare for the forthcoming round of WTO trade negotiations.


THE SCHOOL of Economics is putting the final touches to a programme to train nearly 90 trade negotiators and researchers from the Southern AFrican Development Community (SADC) who will attend the World Trade Organisation's (WTO) latest round of negotiations.

The WTO last year opened the Doha Round (named after the city in Qatar where it was launched in November 2001) of new trade negotiations, explained Professor Don Ross of the School of Economics. "This is the first trade round since the Uruguay Round [1986 to 1994] that launched the WTO," he added.

To prepare the SADC delegates for the gatherings, the Southern African Trade Research Network (SATRN) approached the Trade and Regulatory Policy Group (TRPG) in the School of Economics to come up with a suitable training programme.

In response, the School has adapted one of its regular courses on applied international trade bargaining. Here students are taken through their paces, doing detailed research on countries and simulating negotiations that must adhere to the rules of the WTO.

"This is a major pedagogical service UCT is providing," said Ross of the new training programme for the WTO delegates. The negotiators will attend a 10-day course at UCT in July. It will be run by Ross and colleague Samson Muradzikwa, with assistance from representatives from SATRN.

"One of the crucial points of the simulations is for people to spend a concentrated number of days seeing the world through the eyes of the people who will be their opponents," noted Ross.

The other main function of the course is to get delegates used to the time pressures they will experience at the negotiation tables. "A typical day of a trade bargainer is a very long one in which positions will be taken and they have to see the strategic implications right away, and they've got to make sure they marshal the facts they need to respond very quickly."

The course will provide delegates with a number of tools and devices to help them think about bargaining strategies and to help them gather information "on the fly" and in real time, said Ross. "Frankly, we go out of our way to exhaust them, because exhausted is what they are going to be in the real bargaining."

Members of the TRPG are also putting together key research that will assist SADC negotiators in the WTO talks.