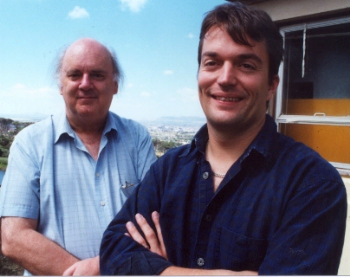 Stars in their eyes: Professor Brian Warner (left) and Dr Patrick Woudt have made the most recent sighting of a remarkable helium-transferring Cataclysmic Variable Star.


USING some of the most advanced telescopes in the world, two UCT astronomers caused an international stir when they came upon a cataclysmic variable star (CVs) with a remarkably short orbital period of only 10 minutes.

Dr Patrick Woudt and Professor Brian Warner of the Department of Astronomy made their stellar discovery as the result of a survey of faint southern CVs using the 1.9 and 1.0-m telescopes of the South African Astronomical Observatory in combination with the UCT Charged Coupled Device (CCD), a camera used to take electronic snapshots of the skies. The purpose of the survey was to identify sample – CVs and other interesting objects – that can be given a thorough spectroscopic going-over with the South African Large Telescope (SALT), once it is completed.

The SALT is currently under construction in the Karoo, and will on its completion in 2004 be the largest single telescope in the Southern Hemisphere.

CVs consist of a rotating set of two stars (binary stars) in which mass is transferred from one to the other. The type that Warner and Woudt discovered consists of two degenerate white dwarfs (compact, evolved stars) that have lost all their hydrogen and have only their helium cores exposed.

The mass that the one is transferring to the other consists entirely of helium, said Woudt. "The two also form such a close binary, that the separation between the two stars is only 1/4 of the radius of the sun," he added. "We deduced this from our observations in which we saw the stars rotate around each other in the very short time of only 10 minutes, which is much shorter than other CVs".

This is only the ninth sighting of such a highly evolved helium-transferring CVs since the first of its kind was picked up in 1947. "And the first that a system with such a short orbital period has been so visible in the optical," noted Woudt.

"Also, what's unique about it is that we can actually measure the change [a slowing of the orbital period is expected] over the next one or two years. It's almost impossible to do for any other system because they move around each other much slower, but here the braking is quite strong."

So impressive was the UCT researchers' discovery that they secured time on the world's largest telescope in the United States, which confirmed their findings. Their object has also been baptised ES CET or KUV01584-093.

Woudt and Warner's sighting have been recorded in the Publications of the Astronomical Society of the Pacific in February.