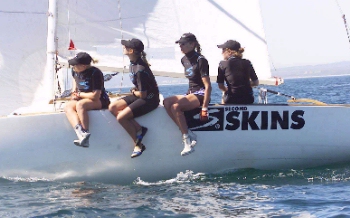 Awesome foursome: two UCT students are part of a four-woman team gearing up to sail in the Inte4rnational Sailing Federation World Championships in Marseilles in July. (From left, back) Dale Hudson (UCT) and Gayle McArthur; and (front) Inge Schabort and Lara Keytel (UCT). 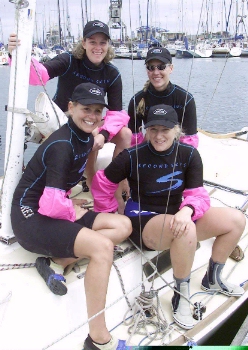 TWO UCT postgraduate students are part of a four-woman sailing team headed for the International Sailing Federation World Championships in Marseilles in July.

Skipper Dale Hudson recently returned from a three-year stint at the University of Technology in Sydney and is back in Cape Town to do her Master's at the UCT/MRC Research Unit for Exercise Science and Sports Medicine, part of the Department of Human Biology. Lara Keytel, who mans the foredeck, is a PhD student researching energy metabolism.

Keytel and fellow PhD student, Karen Sharwood, made the front page of Monday Paper last year when IT billionaire Mark Shuttleworth agreed to work with the two by conducting specially designed physiological tests on himself in space.

The second half of the all-woman team is made up of chartered accountant Inge Schabort (jib trimmer) and retail property letting agent Gayle Mc Arthur (mainsail trimmer). Apart from their sailing competencies, all list an impressive range of skills; Hudson is an avid mountainbiker; Keytel has provincial colours for rowing, is a South African universities rowing champion and marathon runner; Schabort is a talented road cyclist; McArthur has Western Province Colours in cycling, running and horse-riding and is also the series winner of the surfski Clifton Time Trial series.

When did the sailing begin for the UCT duo? At a very young age, it seems. Both are from a long lineage of sailors; Lara grew up at Zeekoevlei, ("which is the best place to learn sailing") and Dale's father, David Hudson, competed at the Barcelona Olympics in '92.

Their anecdotes of early years and family weekends shaped around sailing indicate that both have thoroughly learnt the ropes in terms of physical and technical sailing skills. However, competing at a world-class level requires more serious psychological and intellectual muscle.

"It's like chess on water," Hudson adds. "Strategy and tactics are everything." When they're on the water, where the variable conditions of wind and sea are a constant challenge, they operate in tune, intuitively. "There is immense pressure to act decisively in demanding situations," Hudson adds. "The test is to become 'psyched up and not psyched out'."

The nickname "Skins" comes from their sleek black gear with its distinctive blue trim, sponsored by Second Skins. The uniformity reinforces their team spirit and sense synchronicity. Last year they came in third in the Vodacom Sailing Week's J22-class and were the first women's crew at the finish in this year's national J22 National Championships, coming seventh overall.

In gearing up for the ISAF World Championships in July, the pace is intensive. Each must complete four 90-minute gym sessions a week and three three-hour sessions on the water. This begs the question: where do busy researchers (especially Keytel who jets between Moscow and Cape Town), find the hours needed to train for a major yachting event? "Discipline and organisation," Hudson replies. This is multi-tasking at another level.

(The team requires R106 000 to compete in the ISAF event in Marseilles in July and is urgently looking for a sponsor. If you can help, please contact Lara Keytel, email: lkeytel@sports.uct.ac.za)