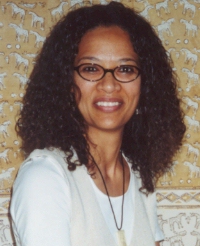 Redefining "colouredness": Dr Zimitri Erasnus is the editor of a new book on coloured identities: Coloured by Place, Shaped by History: New Perspectives on Coloured Identities in Cape Town. The volume is part of the Social Identities South Africa series.

"Who is 'black' in South Africa today? And who is 'coloured'? Who is in charge of the definitions? And why does it matter?"

THESE QUESTIONS frame the thinking and focus of a new book edited by Dr Zimitri Erasmus, a senior lecturer in the Department of Sociology. Coloured by History, Shaped by Place: New Perspectives on Coloured Identities in Cape Town is a collection of essays from a range of contributors, "people who have begun to think about coloured identities in a new way", including Erasmus (who also penned the introduction) and UCT colleagues like Professor Crain Soudien from the Department of Education, and Dr Sean Field, Director of UCT's Centre for Popular Memory.

In her Editor's Note, Erasmus is unequivocal about racial identities. "There is no such thing as the Black 'race'. Blackness, whiteness and colouredness exist, but they are cultural, historical and political identities. To talk about 'race mixture', 'miscegenation', 'inter-racial' sex and 'mixed descent' is to use terms and habits of thought inherited from the very 'race science' that was used to justify oppression, brutality and the marginalisation of 'bastard peoples'."

Erasmus received her PhD in the field of development and cultural change at the University of Nijmegen in the Netherlands. Her research interests include the deployment of identities in contexts of social transformation, managing organisational change and strategies for anti-racist practice.

"The book had its roots in papers presented at a conference at UCT in 1998 that I organised with the help of Edgar Pieterse in response to the worn and inadequate conceptualisations of coloured identities that circulated in Cape Town in the aftermath of 'the Coloured vote' for the National Party in the April 1994 democratic elections," Erasmus said.

"The years since 1994 have given us an opportunity to rethink and challenge our conceptions of 'race' and what it means to be coloured. The point I make is that 'coloured' is not a category. It's a cultural identity."

For Erasmus, who describes herself as 'coloured culturally and black and African politically', it is also about challenging the current South African understanding of the world in terms of black and white: the former generally seen as authentic and the latter, inauthentic.

The book puts up for scrutiny some of the "disconcerting and discomfiting" meanings that have grown around coloured identities. The book argues that coloured identities are a valid part of black and African experiences, while refusing to erase their complexity and specificity.

In her introduction, Re-imagining Coloured Identities in Post-Apartheid South Africa, Erasmus echoes the frustrations of a society bound by preconceptions attached to skin colour and calls for a move away from "the politics of what we look like to a politics of what we do". "We can't deny the meanings attached to skin colour. But we can learn to live differently in our skins. There is more than one way to be coloured and more than one way to be black."

But the racial categorisation problem is compounded by what she terms the "practice of political correctness". "People are afraid to make political mistakes. We need to shift that. We need to start challenging one another. 'Race' should be on the table for discussion."

The book is published by Kwela Books and is available from Clarke's Bookshop in Long Street, Cape Town.