28 May 2002
Thomson sets out to separate fact from fiction in the debate on genetic modification. 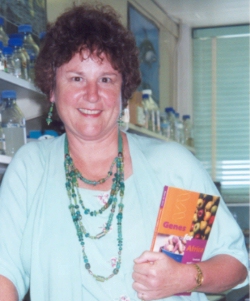 Food for thought: Microbiologist Professor Jennifer Thomson has a new book out, entitled Genes for Africa: Genetically Modified Crops in the Developing World. It is written for the lay person and argues the case for GM foods in Africa and the developing world.


IF AFRICA continues with present agricultural practices, the continent will experience a cereal shortfall of 90-million tons by the year 2025, with devastating consequences for its people, already beleaguered by famine, civil war and HIV/AIDS.

Genetically modified foods present an alternative, albeit a fiercely controversial solution to many of the continent's food woes. Microbiologist Professor Jennifer Thomson, UCT's outspoken protagonist for genetically modified (GM) foods in Africa, has launched a new book, Genes for Africa: Genetically Modified Crops in the Developing World, a layperson's guide to the topic and a book she hopes will balance the picture.

As a microbiologist, Thomson is acutely aware of the controversies, arguments and counter arguments in the case for GM foods. She has run laboratories at the forefront of GM research in southern Africa since 1978 and participates in conferences on the topic throughout the world.

In the book, she separates fact from fiction, explaining GM technology and looking at the differences and similarities between genetic modifications, conventional plant breeding and natural processes such as cross pollination and mutations.

There are also chapters devoted to controversial issues such as food safety (for GM foods and organically grown food), patents, labelling and regulations and controls. Importantly, she addresses repeated concerns and fears in a question-and-answer section of the book. But she remains firm in her stance that in Africa, and the rest of the developing world, GM modified crops can help to alleviate huge food shortages.

"But GM technology on its own isn't enough," she warns. "It's just part of a wider solution."

University Press invited her to write the book in 1999. Accepting the challenge as "a great opportunity", Thomson penned the first draft in just four weeks, retiring to a friend's home in Plettenberg Bay ("No, it was not raining but I did turn my computer to face the wall!"). The book's structure was already well in place.

"I had decided on a contents list and had kept chapter files into which I put any new material."

The final draft was couriered to Thomson in America where she was attending a workshop. It was launched, appropriately if not surprisingly, at the Village Bookshop in Plett where 40 hand-bound copies were delivered 20 minutes before the launch.

Her final words are sobering. "There is no such things as safe food, only the safe use of food."