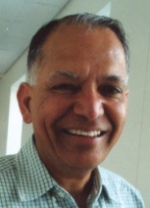 Joseph, the first and only US ambassador to present his credentials to Nelson Mandela during his tenure as South African president, is currently at the GSB helping to set up the Emerging Leaders Programme for "mid-career" leaders in government, business and non-governmental sectors. This is a joint initiative between the Southern Africa–United States Centre for Leadership and Public Values at UCT and its namesake at the Terry Sanford Institute of Public Policy at Duke University.

The Emerging Leadership Programme, to which he is currently adding the final touches, matches up-and-coming leaders with prominent business, government and non-governmental leaders as mentors.

Former High Commissioner to the United Kingdom and current Chief Executive of SATOUR, Cheryl Carolus, and UCT Distinguished Professor Jakes Gerwel are among those who have been recruited as either mentors or board members for the project.

A vocal and longstanding anti-apartheid activist in the US, Joseph served under four US Presidents – Jimmy Carter, Ronald Reagan, George Bush and Bill Clinton, the latter posting him to South Africa in 1995 as ambassador to Mandela's newly elected government. In recognition of his championing of South Africa, President Thabo Mbeki awarded him the Order of Good Hope, the highest honour the country bestows on a citizen of another country, in 1999.

Currently, Joseph is Professor of the Practice of Public Policy at Duke University, and as part of his agreement with Duke spends about six months of every year at the GSB.

Jain, Professor of Human Resources and Labour Relations at McMaster University, is one of the GSB's honorary research associates and currently visiting the GSB as Donald Gordon Fellow. He is the author of numerous books and articles, and has been intrinsically involved in Canadian affirmative action and human rights issues.

He is presently working on his latest book with the GSB's Professor Frank Horwitz, comparing the state of employment equity in Canadian and South African companies.

It was his association with the GSB in 1995 that attracted the South African government's attention, and Jain was approached to, among other things, assist with the Employment Equity Bill that was being drafted in the late 1990s. "It's very similar to the Canadian Bill, and that was useful for me because I could relate to the South African government the experiences of Canada, and I could talk to them about best practices in the United States, the UK and a couple other countries," he said.

Canada's policies (Chinese Canadians, south Asians and blacks feature most prominently among Canada's nine "visible minorities") really took off in 1985, when the government realised that they would have to mandate businesses to make affirmative action an essential part of their business plans, explained Jain. The government also got the Canadian Human Rights Commission to give them the right to audit employers.

So critical was Jain's role in the development of the South African Bill that he was among those who addressed the media at the national press conference when it was made public in 1998.