A LEOPARD crawling under compact rooikrans in search of nesting penguins on Robben Island is something MSc student Jenny Griffin is used to, even while nursing a dog bite wound (inflicted by one of her own in a fight).

Her passion for the vulnerable species of African penguin (Spheniscus demersus) and her subsequent research into the factors contributing to their breeding success have won her a 2002 Dudley D'Ewes Scholarship, a postgraduate grant presented by the Cape Tercentenary Foundation.

Griffin, who is attached to the Avian Demography Unit (ADU), completed a National Diploma in Nature Conservation at Technikon SA and a BSc Honours degree in Marine Biology at UCT. She travels to Robben Island weekly, which is when her leopard crawling skills come into play. Her task is to assess the factors that affect the breeding productivity of these endemic penguins, such as choice of breeding habitat and nest types (some provide more protection for eggs against predatory kelp gulls), temperature and rainfall.

Although the penguin population numbers have decreased dramatically over the past century (the population of nearly 2 million in the early 1900s dwindled to a mere 170 000 towards the end of the century), Robben Island is one of the few breeding colonies where the African penguin is increasing. "After being exterminated by sailors in the 1800s, African penguins returned to the Island in 1983 when nine pairs were observed breeding," Griffin said. The numbers have steadily increased with about 3 100 pairs observed breeding in 1996 and 6 723 breeding pairs recorded in the 2001 population census.

"It is possible that the availability of suitable breeding habitat, together with abundant food resources in Table Bay, have facilitated the rapid growth of this colony," she added. Although a scourge on the mainland just across the water, alien vegetation on the Island is actually working for the penguins, providing nesting birds with shade and protection from predators and reducing heat stress and associated nest desertions. "It also diminishes nest predation by kelp gulls, thereby increasing reproductive success," Griffin pointed out.

Griffin is concerned that possible alien vegetation clearing programmes on the Island (to reduce the risk of fire and to increase grazing habitat for game) could adversely affect nesting sites. "It is vitally important that we assess the likely impact on the penguins' productivity of the removal of rooikrans, pines and eucalyptus within the breeding colony. This will help us make recommendations for future vegetation management on the Island."

The main focus of her research is to determine the extent to which habitat selection (macro-habitat) and choice of nest site (micro-habitat) affect nesting success. In her log, Griffin also notes other factors that are likely to affect breeding success; the distance of the nest site from the sea, climatic conditions, nest density, food availability and human disturbance. Where possible Griffin will also investigate the effect of nest and mate fidelity on productivity.

Each week Griffin monitors 25 nests in each habitat (coastal grassland, coastal rooikrans thicket, inland rooikrans, inland eucalyptus forest and disturbed boardwalk) and will continue her visits over two breeding seasons, noting the nest types (burrow, scrape, vegetation or artificial nests which include wooden A-frame artificial burrows and man-made structures on the Island) and the percentage of covering offered.

"I get daily temperatures and rainfall data from the Island's weather station and correlate these with peaks in nest desertions or nest failure."

She will also conduct experiments using temperature probes attached to data loggers to compare nest temperatures between various nest and habitat types. This is where the D'Ewes Scholarship money has come in handy. Griffin will put the grant money towards a laptop computer, equipment that will make her job in the field that much easier. "I hope this will provide some information on the temperature levels that cause birds to abandon their nest to cool off in the sea, exposing their eggs to gulls." 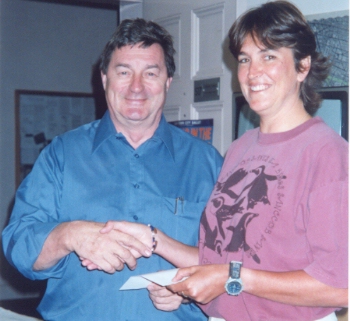