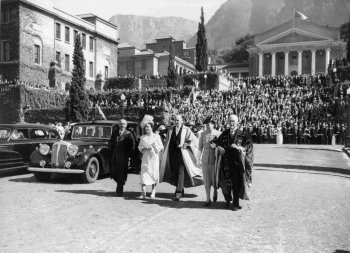 Loyalty to Royalty: Queen Elizabeth (as she then was) at UCT on April 22, 1947, the day she received an honorary Doctor of Laws degree." With her are (left) Prof Theo le Roux and (right) the Vice-Chancellor, Dr T.B. Davie, Mrs Le Roux and General Jan Smuts, Chancellor of UCT (1937-1950). The terraces are massed with "rapturous students" in a display of loyalty to the British Crown.


WITH THE death of Queen Elizabeth, the Queen Mother, on March 30 and her funeral last Tuesday, April 9, a nation and the world said farewell to a woman who never expected to be queen.

In 1936 the abdication of King Edward VIII thrust the 36-year old Duchess and her husband, the Duke of York (who became King George VI), into the limelight and propelled her "from relative obscurity to become Queen Empress, reigning with her husband over 600 million subjects", according to the BBC News site.

She lived longer than any other king or queen in British history, although her reign as Consort was quite short, because of the death of King George VI in 1952 and the accessation to the throne of her daughter, Elizabeth II (crowned in 1953).

It is interesting to trace the legacy these royals left at UCT. The Queen Mother received an honorary LLD degree (Doctor of Laws) from the University on April 22, 1947. Her brother-in-law, Edward, then Prince of Wales, was the first Chancellor of UCT (1918 to 1936). He resigned from the position on becoming King Edward VIII.

"There was an immense feeling of connection with UCT," said Associate Professor Howard Phillips from the Historical Studies Department. During the Royal visit to South Africa in 1947 there was an outpouring of warmth and sentiment among many English speaking and black South Africans. The visit was, in a sense, a reward for South Africa's loyalty to the Allied cause during World War II."

In his book, The University of Cape Town 1918-1948: The Formative Years, Phillips wrote: "UCT and its students were deeply affected by WWII ... as barely a phase of student life escaped at least the indirect effects of war. Not only were students of the right age for military recruitment, but the distinctive English-Afrikaner composition of UCT's student body meant that at times the campus became a tense microcosm of national political divisions among whites".

This loyalty is borne out later in Phillips' text when he describes the various identities of UCT during the years 1939-48. When the Queen Mother visited UCT in 1947 to receive her LLD in Jameson Hall, she was greeted by hundreds of UCT students with "rapture verging on heroine worship". "There was UCT the institution infinitely loyal to the British Crown." 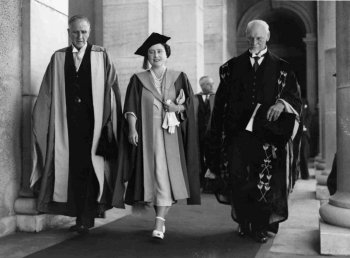