Providence gets the better of coincidence following car hijackings 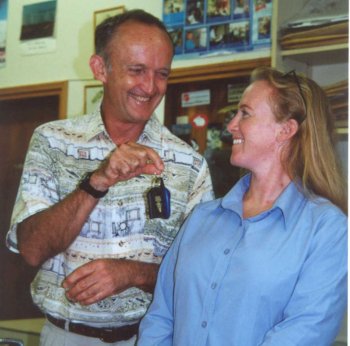 Keys to the crime: Zoology's Professor Charles Griffiths and Master's student Belinda Day tell of a bizarre coincidence where they were attacked by the same gang of car hijackers, on the same night but in different neighbourhoods. Griffith's bloodied VW keys were eventually found in a car abandoned at the scene of Day's attack.


MOST PEOPLE can tell a personal story about a strange coincidence, but Professor Charles Griffiths and Master's student Belinda Day, both of the Zoology Department, were part of a particularly alarming shared experience, when they were recently attacked by the same gang of gun-wielding car hijackers, 15 minutes apart.

The attacks were numbers two and three in a string of four hijack attempts perpetrated by the gang on the same night. Fortunately all parties lived to tell the tale, Griffiths with several new scars on his forehead, where he was pistol-whipped, and Day probably with a new respect for mace.

Griffiths was returning home after dropping a visiting academic at his apartment when the gang surprised him in the driveway of his Claremont home, behind a remote controlled gate, complete with spikes. They pulled him from his Kombi and proceeded to assault and pistol whip him, eventually wresting the car keys from his hand. Fortunately Griffiths' family had by this time heard the commotion and pressed a panic button, which sent the hijackers scurrying, some over the spiked fence, leaving him bloodied and shaken.

The gang proceeded to Day's neighbourhood (in the car stolen from the first victim). She had just returned to her Mowbray home and had vigilantly checked the road and carport before alighting.

As she approached her gate a car raced down the road, but reversed when the occupants saw her. Two of the gang pointed guns at her and demanded her keys, pushing her to the ground. Another clamped his hand over Day's mouth, but when they tried to drag her into the boot of her car, she resisted fiercely.

In the ensuing tussle Day managed to get hold of her keys with the mace spray attachment, which she used. The main attacker fell back, but another tried to force her into the boot.

This time her screams alerted neighbours and the men fled in her Toyota, leaving their original vehicle and a set of bloodied VW keys behind. Day's Toyota was used later in a BMW hijacking, which in turn was an escape vehicle in an armed robbery!

Neither victim, nor the investigating officers, at first connected the two crimes. It was the Departmental grapevine, which circulated their individual horror stories on the Monday morning after the attacks, which alerted Griffiths that, by some strange co-incidence, the keys found by Day might be his. This was indeed the case.

Good news is that police appear to have identified the gang, although arrests have yet to be made. "Life is not boring in South Africa," Day said philosophically. She recently surprised five men who had broken into her home. Fortunately they left. Griffiths is still trying to believe what happened and says it is a sad indictment that government squabbles about whether AIDS or violent crime is the main killer in South Africa.

"In any developed country neither would even rank in the top ten causes of death."