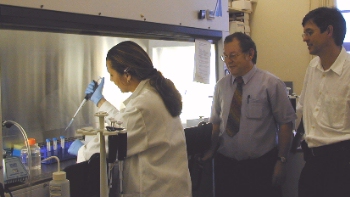 
THE DEPARTMENT of Arts, Culture, Science and Technology (DACST) has awarded R2.5-million to UCT for TB vaccine research. TB is one of the major research areas at UCT's new Institute of Infectious Diseases and Molecular Medicine (IIDMM).

The money, which has been awarded through the Medical Research Council (MRC), will fund the tuberculosis vaccine research of, among others, Professor Lafras Steyn, Head of Microbiology Medicine at UCT's Faculty of Health Sciences. The grant is part of a programme by the MRC to contract scientists in various tertiary institutions to make a new TB vaccine. Steyn's work is part of a network of TB research at UCT that is supported by DACST, the MRC, The Wellcome Trust and the Sequella Global TB Foundation. Steyn, who is also co-ordinator of TB research at the IIDMM, explains why there is a need for research into a new vaccine.

"We have a vaccine at the moment called BCG (Bacillus Calmette-Guerin) which at best prevents disseminated TB but does not prevent Pulmonary Tuberculosis (TB in the lungs). This makes up more than 80% of cases."

Steyn's research involves identifying the critical genes that enable TB to cause disease. By genetically engineering the organism (TB) to delete the genes, the organism is attenuated. The attenuated organism will be used for further development of a TB vaccine.

This study ties up with the immunology studies of Professor Stan Ress, Head of the Division of Clinical Immunology in the Department of Medicine, who also received DACST funding. Although all children are vaccinated with BCG, Ress is trying to understand and compare the basic protective immune response in infants, and why, after being vaccinated with BCG, some still contract the disease. He is working alongside Professor Greg Hussey and colleagues on this project. The crux of the study is to identify the correlates of protection markers, required to fend off the disease, in order to develop a new vaccine.

The research will be done on the cells taken from infants from Worcester, where the world's largest TB vaccine test site will be run for the next five years. The cells will be stored and examined in state-of-the-art BCG laboratories in the Clinical Immunology Division at UCT's Health Sciences Faculty. The site's principle investigator is Associate Professor Greg Hussey, Head of the Paediatric Infectious Diseases Service in the School of Child and Adolescent Health at UCT. "Worcester was chosen as a vaccine site because it probably has the world's highest TB incidence rate, with 2% of young children affected," he said. This is further aggravated by a high incidence of Foetal Alcohol Syndrome and HIV/AIDS.

Among other things, Hussey's investigation evaluates routes of administering the BCG vaccine to see if there is any difference in terms of preventing TB. The two ways of administering the drug are by injection or through the skin with the multi-puncture device, a technique that until recently was used in South Africa.

Another researcher in the area of TB, whose work will hopefully answer questions about TB incidence, is Professor David Beatty in the School of Child and Adolescent Health at Red Cross Children's Hospital. He is investigating why the Western Cape has such a high TB incidence.

Beatty's study examines abnormalities in the immune system that make people either more susceptible or immune to TB particularly in children. His focus is on whether people in the region are genetically susceptible and whether the Western Cape population has more TB susceptibility genes than the rest of the country.