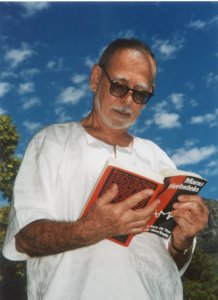 
GOOD NEWS to highlight World Book and Copyright Day on April 23 is that UCT alumnus Manu Herbstein's first book, Ama: a Story of the Atlantic Slave Trade, has won him the Best First Book Category (Africa section) for the 2002 Commonwealth Writers Prize.

The book, a work of fiction, is now competing for the Overall Best First Book category against three other regions in the Commonwealth. The final award ceremony takes place on Wednesday, April 24, in Edinburgh.

Herbstein's historical novel is set in eighteenth century Africa, "a land of many tribes and many enmities between them" and tells the story of Nandzi, later renamed Ama, who is captured by slavers from another tribe.

Briefly, the story tells how she is sold several times and is eventually sent across the Atlantic to the slave market of Brazil where she is sold to a plantation owner.

Reviewer India Edghill writes: "Ama's author tries to depict the Atlantic slave trade as it was, making no concession to modern revisionism; readers will look in vain for stereotypes – Herbstein does an admirable job of bringing a strange, harsh world to life."

Kofi Anyidoho, Professor and Head of Department of English at the University of Ghana, said that the book like none before it has captured the story of the Atlantic slave trade in its total complexity and laid out its magical implications fully.

Muizenberg-born Herbstein studied civil engineering at UCT, graduating in 1958, but moved to Ghana in the early 1960s for political reasons. He is part of a long line of Herbsteins who have graduated from UCT.

"My father, Joseph, was a member of the SRC in the early part of the century," he told Monday Paper while visiting UCT last month. He later went on to become Acting Judge President of the Cape Division of the Supreme Court."

His elder brother, Frank, studied physics under Nobel Prize winner for Chemistry in 1982, Sir Aaron Klug, and is now Emeritus professor of Chemistry at Haifa Technikon (he recently delivered a lecture at UCT).