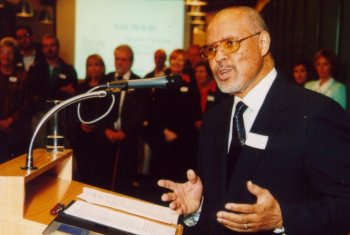 Leading from the front: Professor James Joseph, former US Ambassador to South Africa, speaks at the launch of the GSB's new Centre for Leadership and Public Values.


THE UCT Graduate School of Business has launched a new Centre for Leadership and Public Values as a joint venture with the Terry Sanford Institute at Duke University in the United States.

The Centre aims to enhance the capacity of emerging leaders across southern Africa and will emphasise what it means to be a responsible leader, rather than provide an analysis of effective leadership.

"In today's complex world it is no longer enough for leaders to rely on power and authority alone to achieve their ends," said James Joseph, former US Ambassador to South Africa and Professor at Duke University. Speaking at the launch of the Centre, Joseph said that many customers and communities now regard ethics as a "vital part of the bottom line", and are demanding that leaders in government and business operate more responsibly.

"In this context principle-centred leadership, the ability to influence others through inspiration, persuasion and other forms of motivation to pursue a mission or achieve a goal in ways that elevate everyone involved, becomes critical," he added. "While ethics was once used to humanise power, in the new millennium, ethics is power."

Director of the Centre, Ceri Oliver-Evans, said that the GSB's decision to establish a centre focusing on ethics and accountability in leadership had been vindicated by the recent spate of company failures and the global focus on corporate governance. "There are a number of existing centres and programmes focusing on the functional skills of management, but this Centre aims to transcend these," she expanded. "Through its emphasis on responsibility and principle-centred leadership, the Centre will equip leaders across all sectors with the extra dimension that they will need to operate successfully."

Mentorship is the primary means by which the Centre will achieve this, creating a haven where emerging leaders can learn from more established and successful leaders who have distinguished themselves during their long careers in service to the ideals of civil society.

Joseph, who has been the principal architect of the Centre, consulted widely across southern Africa to identify the areas of greatest need before formulating this model.

The names of the Centre's first 22 fellows were also announced at the launch. They have been drawn from business, government and civil society across southern Africa and previously disadvantaged groups in the US, and chosen from a pool of candidates nominated by established leaders in all three sectors.

The US-based Kellogg, Mott and Ford Foundations have funded the Centre for the first three years of its existence.