Make that a double 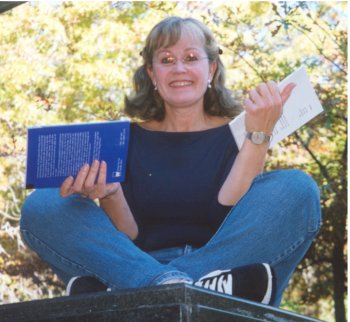 Doing it by the book: Dr Tzili Reisenberger has authored two new books.


DON'T LOOK for Dr Azila (Tzili) Talit Reisenberger's first book of Hebrew poetry under her surname. You won't find it. Instead the senior lecturer and researcher from the Department of Hebrew and Jewish Studies has published her anthology, Cycle of Love, under her first name, simply "Azila".

"The rest is such a mouthful," she laughs. "Azila is a distinctive name and my husband suggested I just stick to that." She not only has a new book of poetry on the shelves (some of it is also available in English), but has also published a collection of essays by South African women, under the title Women's Spirituality in the Transformation of South Africa.

Reisenberger is a prolific writer on a range of topics. She came to South Africa 25 years ago on honeymoon and stayed. But the life of a housewife offered limited scope and she enrolled at UCT, graduating in 1980 and later completing her Masters and PhD qualifications. "With each degree came a baby," she joked. The breastfeeding mother was a familiar sight in the lecture rooms. Indeed, the appeal of motherhood and gender issues fuelled her academic interests, in particular a fascinating study of women and mothers in the Bible.

Her articles on aspects of maternal disease and Biblical birthing (derived from analysing Biblical texts according to modern medicine) have revealed hidden dimension to many stories; for example, that Isaac was a diabetic and that Jacob and Esau had a transfusion syndrome, which explains that even though they looked different, they were identical twins.

Ever busy, Reisenberger is currently co-authoring an "inter-departmental" book with Associate Professor Chris van der Merwe, (Afrikaans and Netherlandic Studies) and Rayda Jacobs, the author of Saachs Street and a TV and radio personality, on a commentary on the Book of Genesis from the perspective of three religions: Christianity, Judaism and Islam.