From Robben Island to the Siberian tundra 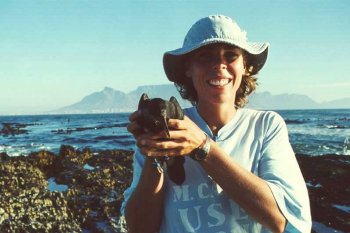 Headed for the tundra: PhD student Kathy Calf has won a prestigious Skye Foundation award that will take her to the Siberian tundra in July to study shorebird chick energetics.

May 22 is the National Day for Biology Diversity and Monday Paper's focus this week is on two articles allied to the subject: UCT's newest Skye Foundation grant recipient, Kathy Calf, whose studies of energy expenditure in shorebird chicks will take her to the Russian tundra in July, and Professor Jan Glazewski's views on sustainable development.


PhD STUDENT in the Avian Demography Unit Kathy Calf is busy at her computer when Monday Paper arrives to interview her. There is a navy blue weatherproof jacket on a cabinet behind her, the sum total of the clothing she has managed to gather for her six-week sojourn to the Siberian tundra in July.

Calf is researching the prefledging energy requirements in subtropical waders, specifically the energetic implications of self-feeding precocial (chicks that are able to leave the nest at once for food) birds. This work recently won her a highly prestigious (only Deans can nominate candidates) Skye Foundation grant to finance her trip.

Her co-supervisor is Dr Henk Visser from the Centre for Isotope Research and the Zoological Laboratory at the University of Groningen, and an Honorary Research Associate in the ADU. Calf's PhD fits in well with one of Visser's main research interests, the energetics of avian reproduction in relation to latitude, enabling a comparison between the bird species within the Southern Hemisphere and between the Southern and Northern Hemispheres.

"The variety of ways that birds raise their chicks from hatchling to fledging is a large research area," Calf said. "My project deals with chick energetics during this period. It is important because this is the period of peak energy demand on birds and the ability to find enough food might be a limiting factor determining the distribution of species."

Her research focuses on shorebird species, of special interest because these birds feed themselves from the moment they hatch and the energetic demands are greater on them. But Calf's research is the first to examine how shorebird chicks cope in a hot environment. "Almost all this research has been carried out in the temperate and arctic zones of the Northern Hemisphere. To appreciate the differences between shorebird chicks growing in hot and cold climates, it will be very valuable for me to experience the opposite extreme in an arctic environment."

Calf is the newest member of an international team of doctoral students who have Visser as their co-supervisor. "The others work in cold environments. I this have the unique opportunity to synthesise the full body of research and to conclude my PhD thesis with a chapter dealing with hot vs cold comparisons of shorebird chicks."

In the meantime, Calf hopes to learn a smattering of Russian, enough to get her by at the biology station on the Taimyr Peninsula, a facility she will share with three Dutch and four to six Russian researchers. The Dutch built the station in 1996 and the closest town is 50 km away. After lengthy field trips to Robben Island, she is unconcerned about isolation. "I know the Russian for 'thank you' and 'banana'," she says proudly. (Not too many of those on the tundra.)

Calf is not the only ADU member planning some "northern exposure" as her co-supervisor, ADU Director, Professor Les Underhill will also visit the tundra later this year to conduct research on the Pyasina Delta, 200 km east of Dikson.