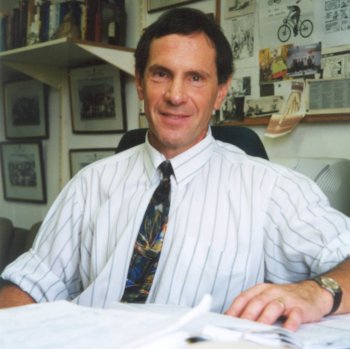 "Best practice in the West, or in large economies such as Japan, has relevance to both African and Asian organisations, but Asian emergent economies in transition are ones we can learn much from."


DEVELOPING countries such as South Africa have much to learn from the East about "best management practices". Certainly, the cross-cultural societies and ethnic diversity found in east Asia reflect many of the challenges facing local business, according to the GSB's Professor Frank Horwitz, who recently returned from a sabbatical year in Singapore.

Horwitz, a Professor specialising in Human Resource Managment and Organisational Behaviour, was Visiting Professor at the Nanyang Business School, at Nanyang Technological University. Although widely travelled, he admits to a fascination with the East. "It's the richness in the cultural diversity," he says.

What struck him was the high research quality of the School's faculty, all highly trained, mostly at leading overseas institutions. "Of the 230 faculty, more than 90% have PhDs," he cited. "In Singapore, considerable effort is made to attract the best talent to its three universities, government and private sector."

This talent is nurtured from a young age, with the government providing scholarships for talented school leavers to attend overseas universities. "Small wonder the country is emerging as a talent capital, attracting the brightest minds in the private and academic sectors and government-linked organisations," he adds.

Horwitz believes south east Asian countries have "plenty to offer" countries like South Africa and the rest of the developing world. "Best practice in the West, or in large economies such as Japan, has relevance to both African and Asian organisations, but Asian emergent economies in transition are ones we can learn much from ."

His choice to spend his sabbatical year in Singapore also underpinned his intention to initiate and explore collaborative research projects in Singapore, Hong Kong and China. He undertook three medium-term collaborations with colleagues from these countries.

The first explores best practices for attracting, motivating and retaining knowledge workers (those whose talents, skills and knowledge are core requirements for the competitive advantage of their organisations), a globally relevant theme. "We did a survey in south east Asia of best practices in this regard, which will be replicated in South Africa shortly."

Secondly, Horwitz looked at high-performance work practices and the extent to which south east Asian and African companies could adopt similar organisational practices to improve their people management performances, with an emphasis on cross-cultural human resource management. "In our research we've collected case study data on companies in east Asia and South Africa. There are large South African companies in Singapore, Malaysia, Hong Kong and China. South African Breweries, for example, has more than a dozen joint ventures in China. We're looking at different types of human resources practices between these countries and how these are adapted cross-culturally."

These studies are critical for today's manager, he says. "Most are probably already working in a cross-cultural environment. In addition, more South Africans are working globally. This doesn't always mean they're emigrating; rather, they're working as ex-pats in Thailand, Indonesia, Singapore, Malaysia and Hong Kong. They're in multi-nationals with operations in South Africa and Asia." The potential in this area is very high. "We believe there is a research niche in this area. As academics we need to be intellectual entrepreneurs and develop internationally recognised niche markets for our research."

The third project examines the HR strategies of multi-national companies in south east Asia, using case study data. He plans to do similar studies in South Africa. "International input of this kind is a vital component of our teaching at the GSB," he said. As trade and investment between South Africa and south east Asia grows, the experience and lessons learnt from the region become even more important.

And beyond south east Asia lies the colossus of China. He believes that those who want to operate in a global economy should brush up on their economic investment, cross-cultural and political knowledge of China. "China could overtake Japan in the next 20–25 years, becoming the second biggest economic power in the world. It has maintained a 8%–9% annual economic growth rate," he points out. "Nearly 80% of foreign direct investment in east Asia is going to China. It's a country of fascinating contradictions; a nominally communist country but with more deregulated markets and labour laws than South Africa."

China, he says, is "the country to watch in the 21st century", unless there is a major derailment, such as a potential AIDS crisis similar to the African experience, or internal political instability. It has a population of 1.2 billion people, nearly half of whom are peasants. HIV incidence is also increasing rapidly and it has a huge socio-economic development challenge.

Horwitz has been invited to return to Nanyang in July to teach and continue his research. "I'd like to have an on-going relationship with the School." After all, it takes more than a year to begin to understand the Asian culture and get beneath the surface of a country that not only encourages but celebrates diversity.