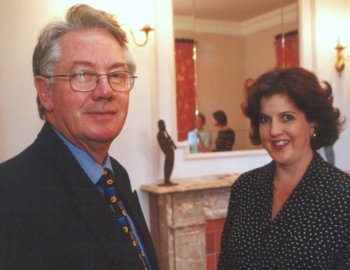 Christmas in South Africa: Professor John Simpson and Bridget Baalbergen were present at the launch of a new report, Stockings and Stokvels, highlighting African celebration of Christmas.


MORE AND MORE western influences are making inroads into the way Africans celebrate Christmas, UCT's Unilever Institute of Strategic Marketing has revealed in their recent report on Stockings and Stokvels.

The study forms part of a larger project that hopes to examine how different cultures in South Africa commemorate special events such as Valentine's Day, Father's Day and Mother's Day, as well as occasions such as funerals, weddings and baby showers. Stockings and Stokvels, managed by Professor John Simpson, Director of the Unilever Institute of Strategic Marketing and Head of the UCT School of Management Studies, and Unilever Institute project manager, Bridget Baalbergen, focuses specifically on the way Africans in major metropolitan areas celebrate Christmas. As part of their research, the Institute held focus groups with African men and women aged between 25 and 35, as well as with some African postgraduate marketing students at UCT.

According to the report, presented at seminars around the country in February this year, planning for Christmas starts at the beginning of the year when people join food stokvels. The planning for the event, especially the catering, is taken extremely seriously, with the money spent in early December – when it is divided among stokvel members.

Extended families cover great distances to get to the festivities, with homes "open to everyone" and all encouraged to enjoy not just the family meal, but also that of the neighbours. "Christmas is all about celebrating togetherness and gift-giving takes on different and slightly less significance to the Western celebration," the report noted.

According to the study, there is a growing fusion of traditional rituals with western traditions among African Christmas celebrations. So, for example, children in Gauteng are starting to lay out old socks on Christmas Eve in the hope that Father Christmas will replace them with new clothes.

There is also an increasing demand among children for Christmas trees, not usually a part of traditional celebrations. Christmas decorations are also present, but are more centred around painting the house and putting on special Christmas curtains than on tinsel, twinkling lights and baubles.

One of the more humorous findings revealed that there is no equivalent word for "reindeer" in African languages, and Santa's trusty steeds are simply referred to as "horses with horns". There is also some confusion as to how Father Christmas, reindeer, elvs, angels and Baby Jesus all fit into the same picture.

The report also provided additional information on the significance of clothing, the vastly different roles of men in the events, Christmas cards and popular brands, among other things.