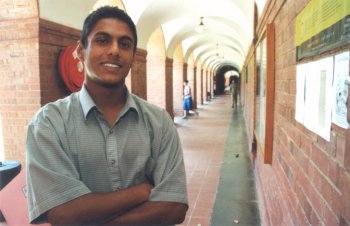 Deliverance: 2002 Smuts Fellow, Rajith Sebastian, hopes to promote the cause of tolerance and understanding at the residence this year.


THE 2002 Smuts Fellow, Rajith Sebastian, plans to use his tenure as a springboard for integration and tolerance at the Upper Campus residence.

A third-year business science student, Sebastian was appointed as Smuts Fellow for the year following an arduous selection process. With his appointment came a handy cash award, but also the responsibility to come up with a project "for the betterment" of Smuts.

He opted to target what he sees as the need for integration among the various races and cultures in Smuts. Born in Kenya to Indian parents, Sebastian's family moved to Transkei when he was about eight years old, but he had little exposure to apartheid.

"I knew about racism, but I didn't have any direct contact with it," he says. "But when I came to UCT, all of a sudden there were so many cultures around. It's not that I'm not used to so many cultures, but it's more than Transkei and here the segregation was more visible, and I was very shocked when I first saw it."

Segregation that was more palpable in Smuts, with its mix of affluent white and Indian students co-habiting with straitened African and coloured students. In the dining hall, students still stick to their racial groups, with a handful of exceptions, he notes as an example.

"I chose this project because I think that in the society we live in, this is almost unacceptable. Everybody has to go out and work 'out there', and all the corporates where I've worked on a part-time basis are emphasising integration."

For his project, Sebastian decided on an education programme, one that includes a noticeboard on which he has posted notes on South African history, as well as snippets on racism and related issues. He also hosted a dinner where the Vice-Chancellor, Professor Njabulo Ndebele, spoke about his experiences with racism and discrimination.

Deloitte & Touche generously awarded R5 000 towards the dinner and his programme.

Sebastian also has a couple of other events lined up for the year, including talks by a number of specialist speakers. While he realises that progress is difficult to measure, he has observed a greater awareness about segregation and tolerance around the residence, he says.

"It's nice to see that people are participating, because it's not easy to talk about these things. I want people to talk to each other, and to understand each other's cultures. This education programme is a little something that I can do. But I hope it will help students break free of that fear of talking to each other."